I cheated.
Yesterday I went to a fancy schmancy wine venue you see, and they didn’t have fast food on the menu. Ridiculous boggarts I know. I got this chicken cordon blue and guys…just …that first bite of spinach was the best food I’ve had in my mouth, senses wise. They exploded and begged for me. I think my body so craved and missed those nutrients that it created the best taste my brain could do. The ravishment I conquered the rest of it with matched a kid eating sugar bears. I have found the opposite of what I’m going for. As a believer in opposites holding a substantial weight this is actually good news. Equal and opposite reactions mind wise.

My body has set itself to crave nutrients. Woooo. Now it just needs to crave sugar and have some sense of wanting to kill itself and I can move to the next phase of the experiment. Oh, I did want to touch on that more. The main point of this is for suicide to stop being so hush hush. About 63% of the people I know have had suicidal thoughts and even more deal with depression. These things might be explained by food and the body literally wanting you to take it off this earth. I know that isn’t the only layer and life events get us down, but our ability to handle those events could also be related. It needs to be a layer in the discussion.
I did get depressed yesterday and less wanting to live. I didn’t want to end life but it definitely was not as enjoyable.
This morning I may have cheated again. When looking through the fridge to see what I’ll have to move to a new home I found some chard. I ate a leaf. A large raw leaf. It wasn’t even bitter. 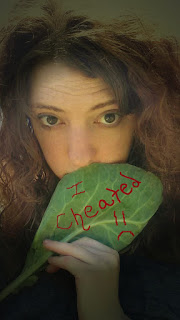 I also ate that one

Today though I feel…bright…mentally. Yesterday it was all slug movement and sugar highs but today it’s just these bright notes of life. I need to stop cheating and see if the opposite can be provoked more.
Also, I published my book today XD

Today I ate Taco Bell and It. Was. Delicious. I got that Doritos taco and then just a regular Taco and I tasted childhood. Mmmmm. Tacos. Those are actually my favorite food. Imma eat there again tomorrow for thrills. Here are my sounds about it. I didn’t video it because I didn’t want to. The normal taco was meh. 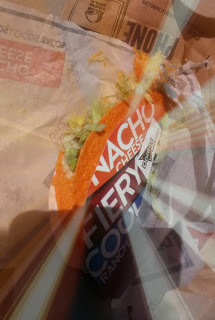 I want more of these

Otherwise, I’ve had chard and am finally moving into the new place so am very happy about this. Too many happy things are happening in my life to be suicidal it seems.

Stomach just gurgled….it hasn’t made sounds in months and months.

I’m sure of why I’m doing this again. Why do people want to kill themselves?

If you don’t believe there is a separation between mind and body then flow in this logic with me of why instead of wanting to reproduce would the body want to kill itself? Is that it…the opposite of wanting to reproduce? Wanting instead to stop existing…to stop continuing the species with your genes and your body….it flows. It just fucking sense makes to me…does it to you?

It is testable…find people with bad diets and see if they want to reproduce as badly as healthy people. From living I “know” that obese people want sex less as I’ve heard from stories/wisdom things but…has it been tested? Also, do obese people have higher tendencies towards suicide. Apparently anorexic ones do.

Okay, that’s…that’s probably a thing but in general, we watch fit people and generally want them to probably as a primal need to continue our species in the best evolutionary way.

I was at a bar with Jo about four days ago and we are both attractive people and he was dancing some while I awkwardly danced in my seat with wantings to join but a bit of fear because no one else was dancing. Well a drunk guy kept trying to get Jo to take me out on the dance floor and at first he was just like doooo it in a get the party started way but the more drunk he got the more he pushed it and was just like get out there and…he started going slower with his words and I was like “Are you just imagining this in  your head?” and he nodded with that slow lip bite type of thing where you know someone has sex in their head and then kept telling us to get out there for thirty minutes. When I asked Jo if it seemed like he wanted us to go mate on the dance floor he agreed.

So maybe it is all linked….maybe. Still, have some experimentation to do.

I don’t want to go back to keto. I seriously have no desire to return to it right now and it has probably a lot to do with the blog and caring more about it but also like…fuck it. Being off it hasn’t killed me and in a way that is so fucking freeing after being in a cult. I get how much I was now…and why I hated it subconsciously. Like I kept feeling annoyed by it and preaching to people and telling them what to do and caring so much when they wouldn’t. It really fucking sucked and it built up into the Box of Chocolates. I think of eggs and really miss them or grass-fed meat and miss it…and lemons but…the lifestyle mind I don’t miss at all. I want to discover the world of food outside of keto first…I did for years and wasn’t taking it in and was just consuming it but now I want to go into it fully aware and explorational with the power to do what I want with food and my body. Health freaks seem to think they own your body and what you do with it. Our bodies are just another marketing scheme.

Then they come at you with studies and scientific knowledge and that I can get behind and understand more. People genuinely wanting to help. Especially people like Maria from Maria Mind and Body and Mark’s Daily Apple are people that genuinely care and that I respect. That’s where I see both sides but I’m so sick of reading about and just doing what they say…I felt like a puppet and was following every recipe and getting the hemp hearts and the chia seeds and when I really got what it was doing and why it was helping it was a bit better but I think a snapping factor was the hemp hearts. I spent twenty dollars on a bag of hearts that were claimed to be superfood and then ate them for a while and felt no difference….I started to just feel the same all the time. I felt good…but I wasn’t fully happy, probably also from circumstance but I guess I thought superfoods and super healthy keto paleo eating would be life-changing and exciting but…it was at first and then maybe I just got bored.

There’s probably a lot there and to that but I won’t go too far into it just yet, let it spread out a little.

I considered reading a book and was like nope, just want to do this.

I’ve just redirected the cult mind to this. Not gone just rebounded.

Okay over to Netflix

But it’s like…also…nothing matters more than this that I could be doing right now. This is something I want to do.

Really not looking forward to the next meal. I look a bit forward to the brand. Like OH!!! I can have Pop Tarts or Cheerios or Taco Bell. But when I actually imagine eating the food…the tacos visualized and then putting them in it just…I don’t want to. The memory is about a year ago now of that weird crunchy yet soft shell and the liquidy meat inside. The quesadilla one is more recent since I tried a bite after being in keto a bit and it was reallllly boring tasting. I kept eating to get that same taste back…oh..haha fuck, addiction spelled out, and the taste wouldn’t come so I kept eating it…hoping. At one point the memory triggered a bit and the old excitement arose…like I was tasting past excitement, but the taste on my lips without that memory was not satisfying.

I did just think of Doritos though and felt excitement. They have merged with Taco Bell a lot lately and I was once excited by the thought of a Doritos shell and that bright orange crunch. How much excitement is based on memory excitement rather than the current moment?

I mean the excitement I feel now is exactly the same feeling as remembering back on the memory of being excited. Are they the same or is this new excitement?

It has to be old because I’m not currently eating it. It must be the idea of it based on past experience and thus it is the memory of the excitement causing current excitement.

Let’s go make it current I suppose. Well…I’m meeting Thomas at eight for funky door so I’ll do it tomorrow…honestly I’m a bit exhausted of this experiment/ blog atm.

Suddenly really wanted to cry. Would have cried if I wasn’t in such control of it. No thought led to it

Heart has continued to beat faster, noticeably so

I miss flavor, blisfuckingly controllable flavor with a rich intensity or bright note that sings in my head

I’m thinking back on when I’ve been on a bad diet before but not…super suicidal..maybe it correlated with highs and lows, when on the high from sugar I was happy and then when it faded I would be low until I got it again, so it would be a cycling.

Suicidal anorexic people is a thing…the main cause of death for anorexia nervosa is suicide…so before the body kills itself they kill it, making it obvious the mind wanted dead.

I’m eating nuts and they’re so bland and not filling me up.

Feel really sick and am really depressed and don’t want to do anything at all. I barely like existing.

I don’t want to stay up to even publish my book…that’s fucked…and yet i can barely convince myself out of it. This life changing ecstasy exciting moment and I can barely care. I was also supposed to move tonight and now that seems horrid as well.

Greetings beautiful people. I bliss out over crafting new flavors, interviewing test makers and restaurant owners and discovering the brain. View all posts by SI-Ya Ray

Greetings beautiful people. I bliss out over crafting new flavors, interviewing test makers and restaurant owners and discovering the brain.